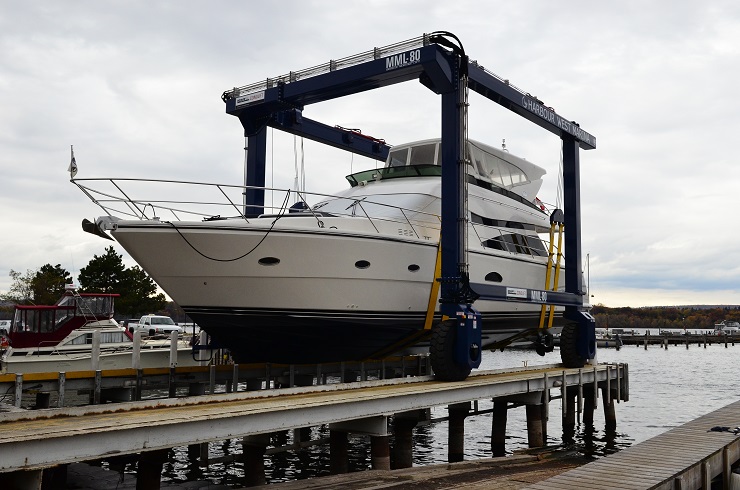 Harbour West Marina has acquired a new lift for recreational boats, capable of handling vessels up to 80 tons.

With the Marina’s existing lift equipment at the end of its operational life, Harbour West is making the jump from its previous 50-ton capacity to a new 80-ton lift, used for launching and hauling out customers’ motor- and sailboats.

“The trend has been for recreational boats to get larger, but not many marinas can handle the big ones,” said Harbour West Marina Manager Kelly Flood. “With this kind of lift capacity, we’ll have an advantage that can attract new slip-holders to Harbour West. We continue to welcome new boaters to the enthusiastic boating community here on the Harbour.”

One of the new, bigger yachts already calling Harbour West home is the Calstar, a 62-ft Motor Yacht built by Neptunus in St. Catharines. “Calstar calls Hamilton Harbour West home due its unique location within Hamilton Bay. Even on windy days when Lake Ontario is nasty, Hamilton Bay is relatively quiet and we can still take Calstar out and enjoy the boat,” said Jan Willem De Jong, Managing Director of Neptunus Yachts. “Harbour West also offers nice nearby restaurants and has covered winter storage, as well as fuel and service.” The Neptunus arrived in Hamilton this summer.

The $360,000 marine-lift is part of HPA’s ongoing investments at Harbour West Marina, to ensure the Marina is a prominent anchor within Hamilton’s redeveloping waterfront neighbourhood, and to attract seasonal slipholders and visiting boaters to the Harbour. “We’re growing the recreational boating activity, and adding to the vibrancy of the waterfront,” said Flood.

Harbour West Marina is located at the far western end of Lake Ontario, in Hamilton Harbour.